The Scholarship program of the St. Andrew’s Society of Philadelphia is designed to foster better understanding and relations between the United States and Scotland through the exchange of the best and brightest university students from our respective countries. Each year, the Society provides funds to send a small group of American students to attend a full year at one of the “Four Ancients”: the Universities of Aberdeen, Edinburgh, Glasgow, and St. Andrew’s. These U.S. scholars are chosen from a pool of applicants nominated by 30 participating colleges and universities in the Philadelphia region.  In return, the Universities of Aberdeen and St. Andrew’s each select a Scottish student to spend a year at Drexel University and the University of Pennsylvania, respectively.

The current amount of each scholarship is $35,000. This amount increases from time to time as our funds and circumstances allow.

Key to the character of our scholarships is the mandatory one-year duration; that is, all Scholars must spend an entire academic year in Scotland. Unlike “semester abroad” or other short-term foreign study programs, this allows our Scholars to truly experience and appreciate the culture, history, and character of Scotland; to fully immerse themselves in the academic and social life at their chosen University, and to make life-long friends from Scotland and around the world. It takes a particularly courageous person to embark on such an adventure, but over 50 years of experience and hundreds of returned Scholars have taught us that the rewards are commensurately great.

All applicants for a St. Andrew’s Society of Philadelphia scholarship must be:

The following criteria are not required, and play no part in the selection process:

Application and Selection Timing and Logistics

Each September, the Scholarship Committee delivers copies of our Application to the head of foreign study at each of the participating colleges and universities, and invites those schools to nominate a scholarship candidate.

The completed Application (Application, Questionnaire, personal essay, letters of recommendation, transcript, and photo) must be returned to the Scholarship Committee by no later than the first business day of March. The nominees will then be invited to attend a luncheon and interview with the Scholarship Committee on a date selected in March. This event consists of a luncheon and informal discussion with Committee members, extemporaneous responses to formal questions posed to each candidate during the luncheon, and 15 to 20-minute interviews of each candidate individually conducted by the entire Committee after lunch. The day begins promptly at 11:30 and ends at approximately 4:00.

The Committee will confer immediately after the last interview and rank all candidates in order of perceived merit. The top candidate will be contacted that same evening and offered a choice of which Scottish university he or she wishes to attend; the second-ranked candidate will be given her or his choice of the remaining schools, and so on until the scholarships to each university are filled. As the typical pool of candidates consists of seven to twelve students, the competition is considerable for these prestigious choices.

Once the scholarships have been awarded, the Committee will advise the Scottish universities of the name(s) of the Scholars who will be attending those schools the following Fall, and establish contact between the Scholars and their schools. All St. Andrew’s Society of Philadelphia Scholars are granted automatic admission to their Scottish university. However, it is still necessary that they complete the application materials and process in order to be formally admitted.

Scholarship funds are distributed in three tranches: in May and August before the scholars depart for Scotland, and in the October after they return. The May and October payments are smaller with the August payment making up the majority of the grant. The May and October payments are distributed at the corresponding meetings of the Society during which the Scholars will introduce themselves before their departure and describe their experiences in Scotland upon their return.

While Scholarship Funds are awarded without limitation as to use, in that rare instance that a Scholar is forced to return to the United States at mid-year due to illness, family crisis or other emergency, the Society will expect a refund of the unused portion.

The 30 participating schools, along with the person currently designated as the point of contact for Scholarship applicants at each school, are listed below. 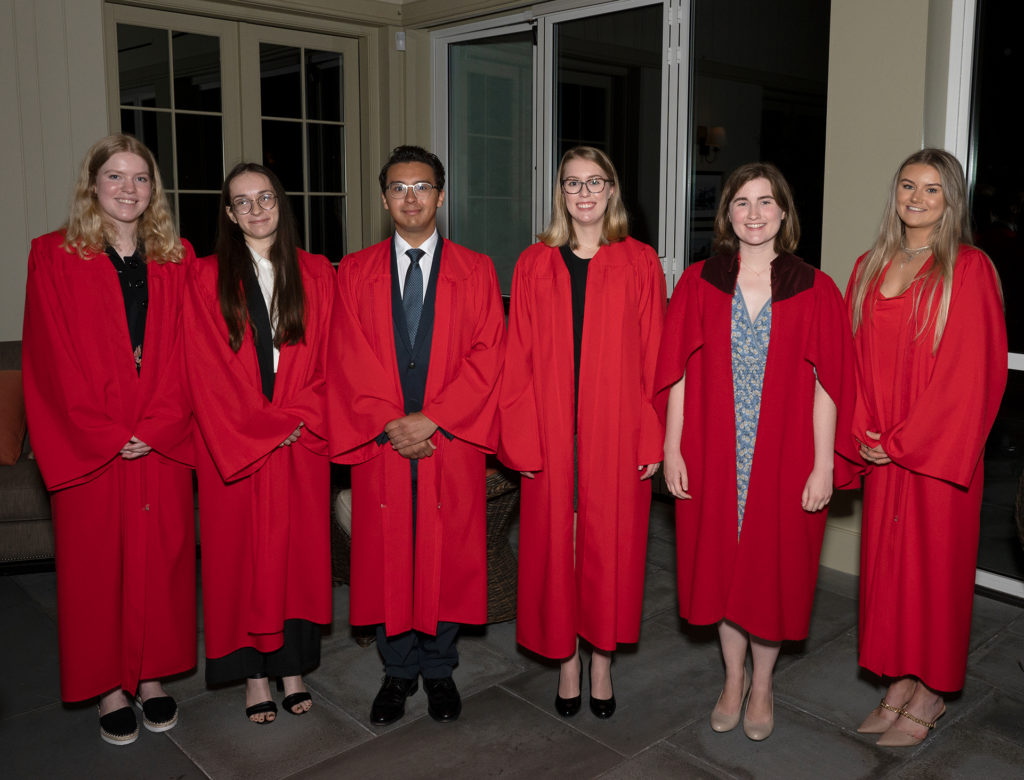 The Society is always willing to consider expanding this list upon the request of any student or administrator at a four-year college or university located within 75 miles of Philadelphia.

All inquiries and completed applications may be addressed to the Scholarship Committee Chair or Vice-Chair: